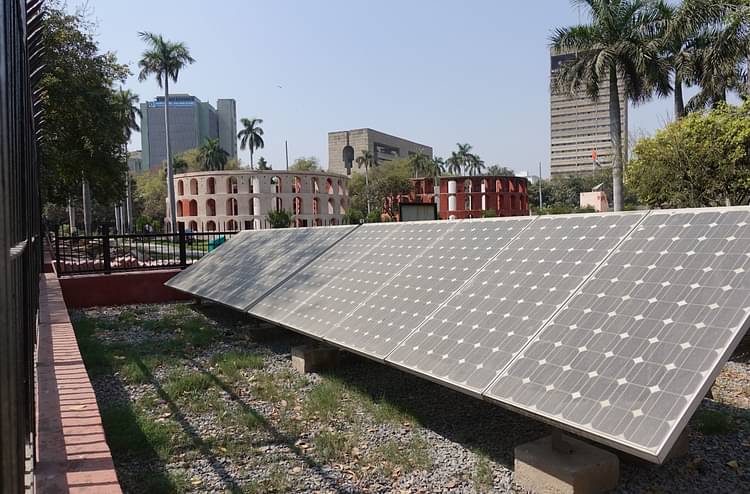 The total cost incurred for installing the solar power capacity was INR 93,908,425. The funding is through a mix of RESCO and Capital Expenditure (CAPEX) model. According to the policy, the project has also received a 30 percent capital subsidy from the Ministry of New and Renewable Energy.

Solar Integrated Lighting Poles : The council plans to install 55 smart poles in Connaught Place and five other major roads under its jurisdiction. The step by NDMC is new initiatives where smart lighting technology will help the city run more efficiently, making it look futuristic at the same time. The body of the poles is used as solar panels. The DISCOM is also maintaining 10,000 new and efficient octagonal streetlight poles that have been installed by the Public Works Department (PWD).

The goal is not only to provide convenience to all the passengers by setting up solar bus stops but also produce clean energy for the environment. The plan is to generate more electricity.

Two state-of-the-art solar bus queue shelters are already functional on Shanti Path which would be the template for four more. The top and sides of these Bus Shelter Queues (BSQ) are covered with solar panels embedded in toughened glass fixed in steel framework making it first such endeavor in the country.

Key Features are aesthetic in appearance, generates 2.7 kW each, connected to the grid and roof and walls of BQS is made of tempered glasses and sandwiching solar panels

Solar Trees : Giving a boost to its solar power initiatives, the New Delhi Municipal Council will install four more solar trees in Central Delhi area. The council has already installed one solar tree at B Block in Connaught Place and is eyeing more such units.

The solar tree has nine petals, top of which are covered with flexible solar panels, capable of generating 1.26KW. It has a sitting area for 16 persons and is equipped with IP67 digital interactive panel, LED lights and charging points for mobiles.

Apart from providing mobile charging facility, it is giving an aesthetic look particularly after sunset, when the leaves of the solar tree light up. This has been developed by Steel Authority of India (SAIL) and the solar panels have been sourced from Central Electronics Limited (CEL).